BAHAWALPUR:
Hasilpur police has arrested an alleged pedophile involved in the abduction and rape of minors in Bahawalpur.
According to the police report, the accused identified as Muhammad Ansar would kidnap children and sexually abuse the minors.
Police claimed to have arrested the serial pedophile using modern technology.
Reportedly, the accused was wanted by police in various cases registered against him in Bahawalnagar, Multan and Bahawalpur.
As many as 10 cases of sexual assault were registered against the suspect.
District Police Officer Muhammad Faisal Kamran told The Express Tribune, ”This is a successful operation by the police to detain a man responsible for the abduction and rape of minors. The society is in turmoil because of such people and this spreads panic among the people. These children are our own, the DPO claimed.
Hasilpur Saddar police formed teams to launch a hunt for the alleged kidnapper and rapist. Police during the operation caught Ansar with the help of modern technology and CCTV footage.
The accused was a resident of Vehari district and used to sell birds on a motorcycle. The alleged pedophile was well acquainted with the neighbourhood.
The suspect would lure the minors by showing them content on his mobile phone. He would then abduct them and take them to an unknown location where he allegedly sexually assaulted the minor victims.
Police officials said the suspect would leave the victims there and flee from the crime scene.
The suspect, during police interrogation, confessed to three incidents of abduction and rape which were not reported to the police.
Published in The Express Tribune, August 8th, 2021.
Ref: https://tribune.com.pk/story/2314521/bahawalpur-police-arrest-serial-ped...
https://tribune.com.pk/epaper/news/Lahore/2021-08-08/ZjRmZTE4OGJjNmQ0ODc... 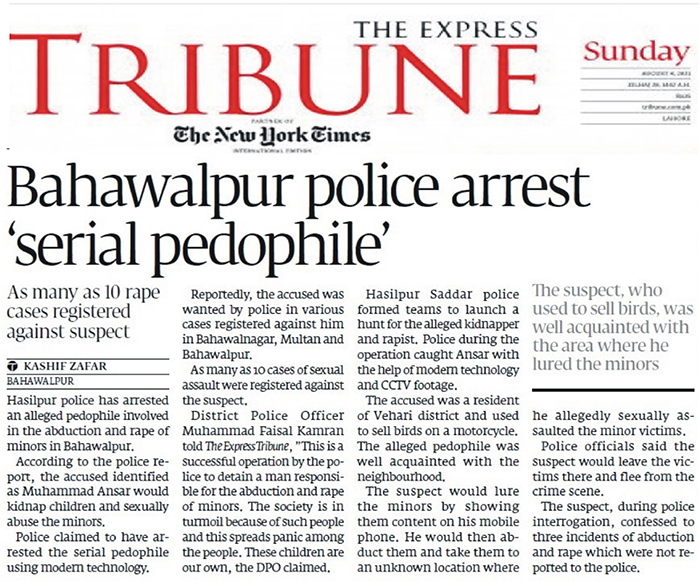