BAHAWALPUR - Bahawalpur police have decided to enhance vigilance and patrolling in the city as part of foolproof security for Muharramul Harram. The security arrangements were discussed at a meeting presided over by DPO Muhammad Faisal Kamran and was attended among others by all SPs, SDPOs and SHOs.

Implementing the National Action Plan for the arrival of Muharram on the direction of DPO Muhammad Faisal Kamran, search operations and mock exercises are going on in the district. Citizens should keep their identity cards and vehicle ownership documents with them.  All wings of Bahawalpur police were given directions to ensure complete coordination for success of the plan.

DPO directed all the SPs to supervise all the security arrangements during the month. He also directed all the police officials to maintain close liaison with peace committees and organisers of Majalis and processions in the month. The DPO directed strict security arrangements and special checking of participants at the gatherings. He said arrangements be ensured for checking of participants of Majalis and processions through metal detectors. Search operations were also conducted within the boundaries of various police stations in Circle Ahmadpur Sharqiya to ensure rooting out of evil and criminal elements. In this manner, sporadic snap checking and blockades were being carried out at various places in the district.

Strict vigilance should be maintained to ensure that security measures are in place by the police as well as peace committees, the DPO maintained and directed the authorities to launch effective search operation as well as combing activities in the slum areas of the city and enhance vigilance at all entry points of the city. The police commandos along with vehicles would perform the security duties at Imambargahs arranging religious gatherings, he said.

He said police officials should get complete bio data of those volunteers performing security duties. Peace committees should be asked to ensure that no stranger is allowed to stay in the worship places for security reasons during the month.DPO Muhammad Faisal Kamran in his message said that people should immediately report any suspicious activity and mischief to the concerned police station or call 15 so that such elements could be brought to book and the society could be protected from unrest and mischief.

During his visit of different churches to check security arrangements here on Sunday, DPO urged divisional SPs, SDPOs and SHOs to ensure daily basis checking of security arrangements of churches. He also directed police officers to keep vigil on suspicious persons and activities to prevent any mishap. He directed police officials to remain alert during security duty. On this occasion, District Police Officer Muhammad Faisal Kamran while issuing instructions said that in view of the ongoing global epidemic Coronavirus, people must implement guidelines of SOPs at places of worship.

He further said It was very important to maintain security and law and order in such places. Under the National Action Plan and in the current regional situation, our duty was very important.  Protecting all citizens, including the Christian community, is one of our top priorities. If we remain vigilant, miscreants will not be able to succeed in their nefarious aims. Protecting the lives and property of the people is my first priority, he added. 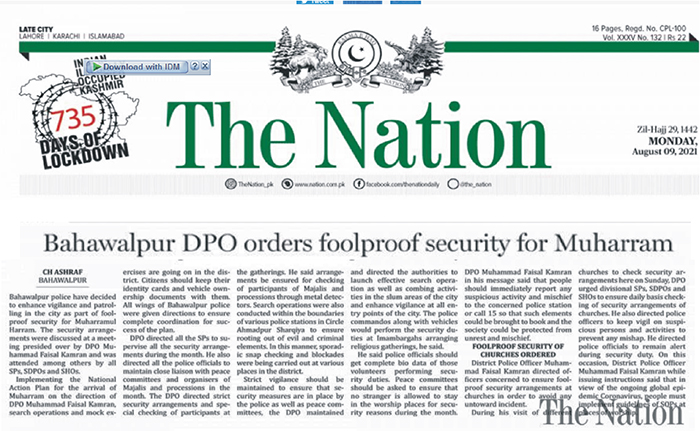