BAHAWALPUR: The Hasilpur Saddar police claimed to have arrested a seminary teacher for allegedly torturing his students after they did not collect hides of sacrificial animals in their areas on the Eidul Azha and went to their homes.

According to Deputy Superintendent of Police Chaudhry Jamshed Akhtar, Qari Muhammad Shafique had asked his students to go out and collect hides of the sacrificial animals on the Eidul Azha. The students went to their own homes instead of collecting hides. This infuriated the suspect and he tortured 10 of the students. A complaint against him was lodged with police who arrested the suspect and lodged him in the lock-up.

BOOKED: The Musafir Khana police claimed to have booked about 23 suspects, including 13 women, on the murder charge for the murder of a man and woman at village Rakrani near Mubarakpur.

According to police, the double murder was the sequel of a second marriage of a man. Fayyaz had married about 16 years ago with the daughter of Muhammad Nawaz Mujawar but the couple remained issueless. He contracted a second marriage recently. The other day, Fayyaz left for Rawalpindi with his new wife. This enraged his first father-in-law Nawaz who, along with his 25 relatives, stormed the house of Fayyaz in his absence.

During the clash, Fayyaz’ brother Altaf was killed in firing while three others, Dilshad, Riaz and Ismail, suffered injuries. Terrified from the indiscriminate firing, the alleged attacker women, in self-defence, locked themselves inside the room where Maryam, wife of one Rab Nawaz, was also killed under mysterious circumstances. Police launched an investigation into the murder of Maryam.

Police shifted both the bodies to the Mubarakpur Health Centre for a postmortem.

HINDUS: DPO Muhammad Faisal Kamran held a meeting with the leaders of Hindu community at the Baghdadul Jadid Police Station their cooperation to promote religious harmony after the temple attack at Bhong in Rahim Yar Khan district.

The leaders of Hindu community assured the DPO of their cooperation while the DPO made a pledge to provide full security to their temples in the district. 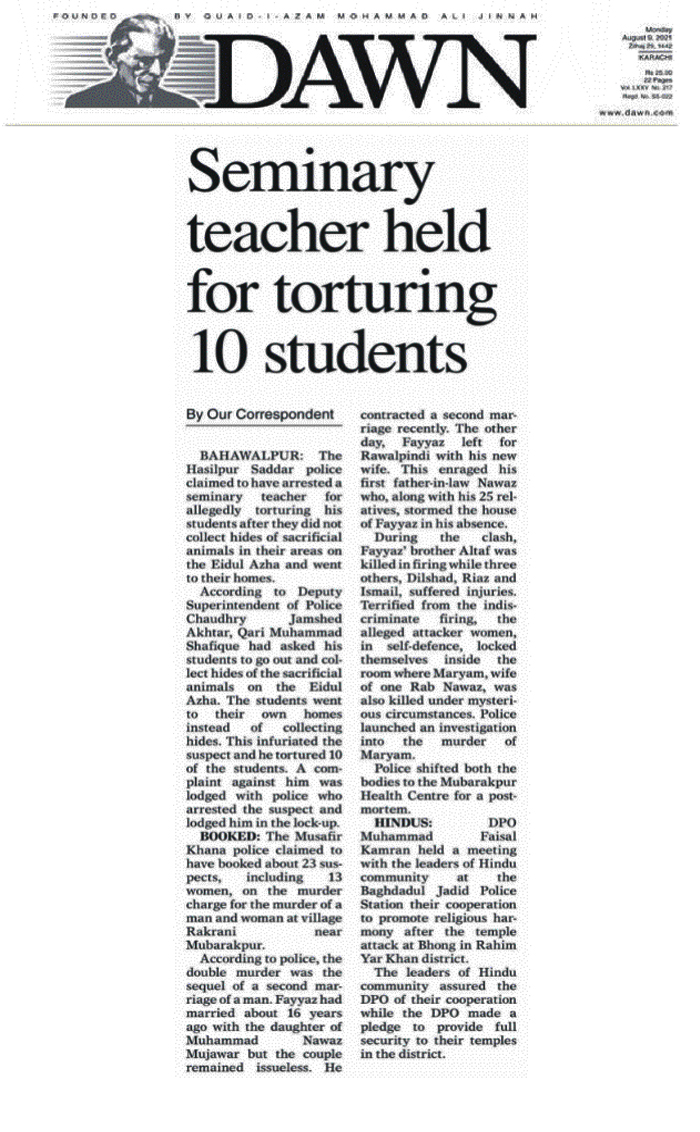