Bahawalpur - Sadar Bahawalpur Police Station in a major operation against the gang involved in motorcycle theft and burglary, arrested the ringleader of the gang, including his accomplice.

Gold, jewellery worth millions of rupees, 13 motorcycles and cash recovered, stolen goods handed over to the owners, Bahawalpur police is arresting the accused and recovering the stolen goods so that maximum relief can be provided to the citizens and more confidence is restored in the police. Operations against such accused will continue in future also,,said  DPO Muhammad Faisal Kamran.

According to details, in the light of orders of Inspector General of Police Punjab Inam Ghani and Additional Inspector General of Police South Punjab Captain (Retd) Zafar Iqbal Awan, as a result of task of District Police Officer Muhammad Faisal Kamran, Bahawalpur Police Station sadar in a major operation against the gang involved in the burglary, the ringleader of the gang was arrested along with his accomplice.

After legal proceedings, the stolen goods were handed over to the original owners, Also for the arrest of fugitive accused Siddique police are conducting raids. During interrogation, illegal weapons used in the incident, 2 pistols, 30 bores were also recovered from the accused and separate cases were registered. DPO Bahawalpur praised the performance of Sadar Bahawalpur Police Station. DPO Muhammad Faisal Kamran issued similar orders to other SHOs of the district to arrest the accused and recover the stolen goods. 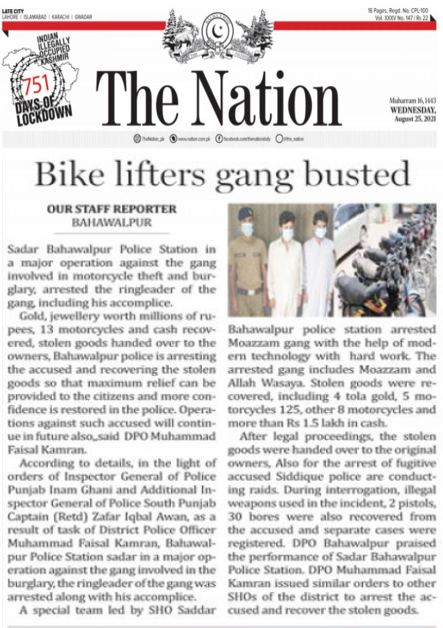