Five member s of a family including two minors were hurt in an acid attack in Jalalabad area within the jurisdiction of Musafir Khana police station. Police said the prime suspect has been taken into custody and investigation is underway.

Reportedly, Anti-Women Harassment and Violence Cell had registered a case against the nominated suspect by the family.

According to details, Musafir Khana police station had received a complaint at around 1 am that a man had thrown acid on women and children in Jalalabad after which police and the Anti-Women Harassment and Violence Cell rushed to the spot.

As per reports, ASP Sadar Circle arrived at the crime scene with a heavy contingent of police. The teams of Crime Scene Investigation Unit and Forensic Science Agency also arrived on the spot to assist in probe.

The victims were rushed to Bahawal Victoria Hospital Bahawalpur for treatment by Rescue 1122 personnel.

“The condition of the victims is out of danger after treatment but they are still receiving medical care at the hospital,” a cop told The Express Tribune.

DPO Muhammad Faisal Kamran vowed to make sure that the person guilty of the crime will be punished in the light of evidence provided by the police. “Such criminals do not deserve any mercy or concession,” he added.

The suspect detained by cops has been identified as Akram. He was arrested by police in an operation conducted in the late hours of the night following the disfiguring attack.

Initial probe suggests that a domestic conflict between families was the precursor behind the acid attack on the women and children. However, police are probing the incident in detail to strengthen the case against the attacker. 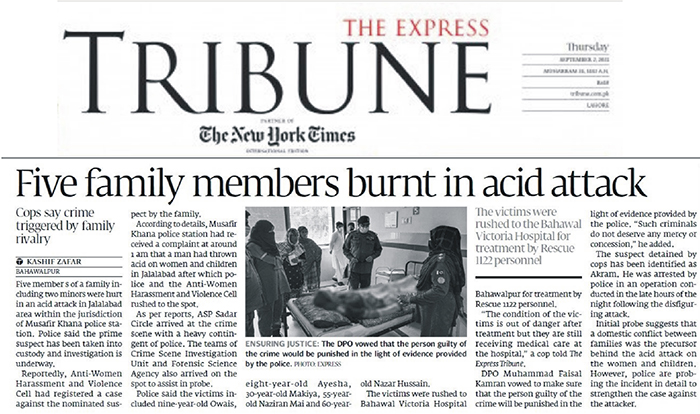