Bahawalpur  - DPO Muhammad Faisal Kamran held an open court on Wednesday which is continuity of delivery of speedy justice to the people. Aboutt 41 citizens participated in the open court.

He directed all SDPOs and SHOs to resolve the issues within the time-frame given by the people and send the report to the DPO office.

Faisal Kamran said that in case of any complaint people can call on the number listed on Penaflex outside the offices and police stations.

Deputy Commissioner Irfan Ali Kathia said that Bahawalpur is a peaceful region and an atmosphere of peace, security and brotherhood has been established.

He said that on the occasion of Chehlum  of Hazrat Imam Hussain (AS) the maintenance of procession routes and cleaning arrangements at meeting places should be completed in time.

The Deputy Commissioner said that on the occasion of Eid Milad-un-Nabi (PBUH) celebrations, repair, maintenance and cleaning arrangements of procession routes should be made in a splendid manner.

DPO Muhammad Faisal Kamran said that foolproof security arrangements would be ensured at the places of procession routes and gatherings on the occasion of Chehlum of Hazrat Imam Hussain (AS).

Security arrangements will be ensured at the places of Naat, he said.

The DPO said that the role of the members of the District Peace Committee and Anjuman-e-Tajiran, scholars belonging to all schools of thought, was very significant in establishing peace during the holy month of Muharram.

He said that along with security arrangements, a traffic plan would be drawn up.  President Central Association of Traders Hafiz Muhammad Younis, Allama Abdul Razzaq Shaiq, Jamal, Syed Salahuddin Jilani,

Syed Naseem Abbas Bukhari and other members expressed their views in the meeting and appreciated the arrangements made by the district administration and police during Muharram.

It was informed in the meeting that a Conference would be held on the occasion of Eid Milad-un-Nabi (PBUH) and the buildings of government and private offices will be illuminated.

Later, prayers were offered for the security, development and prosperity of the country 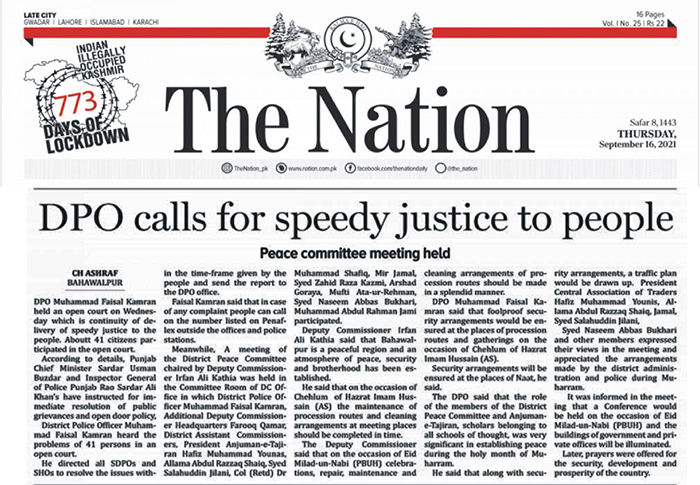