Rescue 15 Bahawalpur is a telephonic aid provided by the police to cater emergencies. All calls are received and responded by 3 assistants through their telephones. Data recorded from callers include the caller’s name, time, date and place of the incident, details of concerned police station, nature of crime and  further the data is also forwarded to Chief Ministers complaint cell.

Providing help in emergency had been the origin of any rescue operations. Previously provided rescue services were outdated, inept and very slow. We only had five active helplines, which were to be operated by five different operators because the system was manual. Our capability of keeping the record of incoming calls was very poor, we could check record only from the CLI which were stored in it only for 15 to 20 mins. After digitalizing the system, although we are still operating five emergency helplines and they are being operated by three operators thereby, we are saving manpower to utilize it at some other end, furthermore, we can have the backup of every incoming call for no less than three months, it is huge betterment. Now, we can listen to the recorded audios which enables us to determine the seriousness of any call. Grasping the emergency we can aptly respond to the caller’s needs. Now, we can also block the mischievous calls. To keep a check on the operators we have an admin control system which is operated by a head operator who makes the operators deal only to emergency. He keeps a check over them by making them avoid any useless conversation or waste time idly. At every call the caller receives a welcome note which says “ ریسکیو 15 بھاولپور کال کرنے کا شکریہ ۔آپ کی کال بہت جلد متعلقہ آفیسر کو ٹرانسفر کردی جاے گی” it helps us build a softer image of police and make the man in emergency feel that the number he dialed is not busy, he has been able to be in contact. Soon his grievances would be redressed. Now, the digital system at 15 automatically attends the call. No operator can miss any call.
The assistants digitally record the following information of a caller: 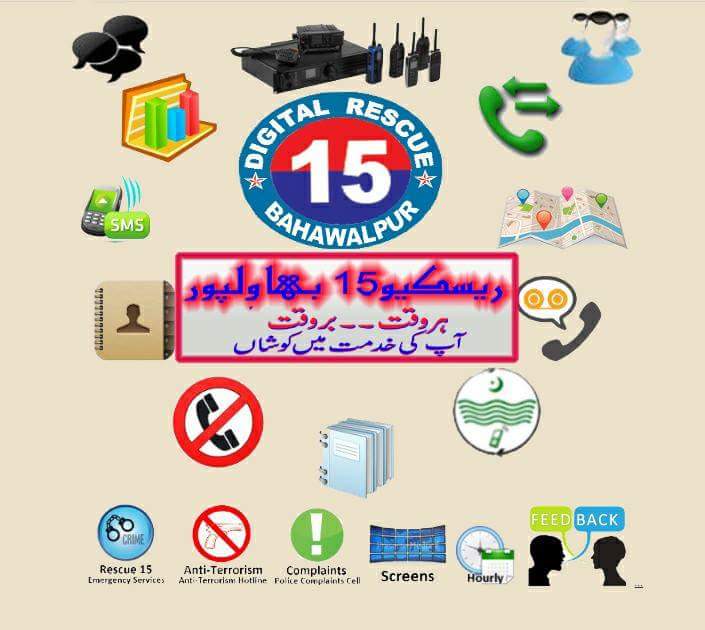 Information of any heinous or cognizable offence is immediately passed on to SSP Bahawalpur through official cell phone by Incharge 15. Team leader also forwardsmthe information to wireless control & GPS Incharge and then wireless control sends police mobile towards crime scene / point of incident etc. Further steps are as under:

It has been observed with concern that sometimes emergency calls especially regarding cognizable offences are received on the Rescue 15 and for Its confirmation is sent to concerned  Police but SHO’s /Police do not pay attention and no cognizance is take well in time.
So, Citizen Feedback System is launched from Punjab Government. Now every important call is uploaded from Rescue 15 on the Chief Minister’s website, and a message is sent from the Chief Minister about the behavior, response and corruption of Police.

Under this system, we can transfer live videos from the place of occurrence to the Rescue 15. The system is secured by five security codes. Nobody can break the security code so the system cannot be hacked. If anybody is however; able to break any one of the security codes the broken security code restarts before he is able to break the next security code. It has been possible because we prepared our own IP system in the Digital Video Recorder so it is more valuable than the general WIFI system because as against the general WIFI system it cannot be hacked or deranged. Under this system, we have installed eight video cameras and eight panic buttons in different eight gold shops in the gold market and the whole system is being monitored from Rescue 15.
We constantly keep an eye on what is going on in the areas of the gold market. In case of any crime we have two instant options to respond i.e. we are seeing through CCTVs what is going on in or around the shops and secondly, the shopkeepers can inform us by pushing of panic buttons which are installed secretively under their feet or their thumbs. As soon as a button is pressed we listen to an alarm in Rescue 15 with a full display of the shop under attack, the name and mobile number of the shop-keeper, so for an apt response we instantly move the nearest mobile on patrol meaning thereby there is every possibility to reach on the crime scene and fight crime live. Through, this system we may have CCTV recording for a whole month, the best part of the system is that we have zooming options both on the DVR in the Gold market and the display at the Rescue 15. We have plans to net the Daewoo Terminal, The Faisal Movers, The Bahawalpur Victoria Hospital, all the banks and the other important installations in the city and we have plans to decentralize this system to the Tehsil level by controlling it centrally by the Rescue 15 Bahawalpur.